Yesterday was the day Hamerex took to the stage at Clarence Park Festival for their first show at an outdoor festival and the first as a 4 piece since Joe left the band and you know what? It was absolutely brilliant.

The band played a very successful set including the 3 brand new tracks with the opener Descent Of Angels, Edge Of Madness and The Life Of Death along side Rites Of Passage tracks The Gates Of Hades, The Headless Horseman, Stalker, Hypnotise and Waste Away. We even played for the first time in 2-3 years and unrehearsed that favourite from the past, Calling All Monsters. We have a lot of footage of our set at Clarence as well as some photo’s which we’re expecting more to become available as the week progresses. It was a spectacular day and was probably one of the bands best performances. We thank everyone that took the time to come along to see the band as well as the organizers at the Wakefield Music Collective for having us on. We will be posting photos and possibly some videos over the coming week Hamerex at Clarence so keep checking back. 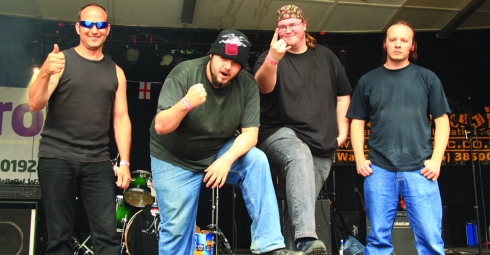 If you filmed any of the bands set and have any photo’s then we want to see them and possibly use them. Please send to hamerexuk@gmail.com.