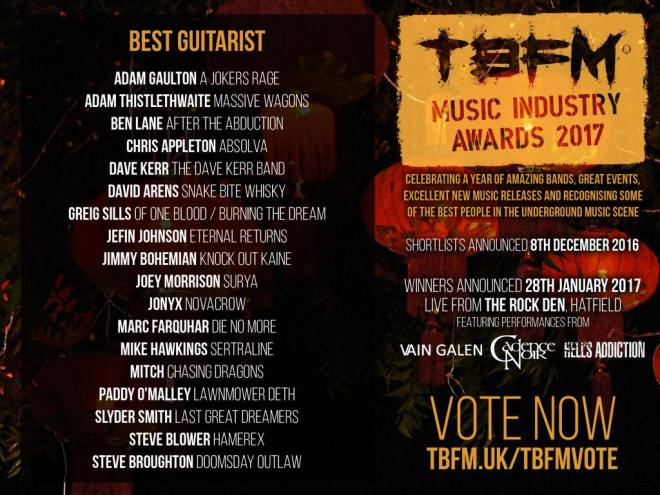 Steve here. I  got a bit of a surprise tonight as it has been announced tonight that I’ve been nominated for Best Guitarist for the TBFM Music Industry Awards 2017. I just want to thank you all that voted for me for the nomination and that I’m very honoured that you’ve put me among all of the great guitarists that have also been nominated.

However, it’s not over yet. To get to the next stage is another vote, so if you wish to vote for me to get on to the shortlist for the Best Guitarist award, you can vote now, up until the 30th November over at http://www.tbfm.uk/tbfmvote, with shortlist nominations to be announced on the 8th December.

Unfortunately we didn’t receive any other nominations for the band or album, which is a shame, especially with how well the album’s going down with everyone that has it or has checked it out.

If you happen to vote for me, thank you in advance, it means a lot, because it’s from you guys. If you don’t vote, it’s also cool as it’s not about awards for this band, it’s always about the music.

One thought on “Steve Nominated In TBFM Awards. Vote Now!”