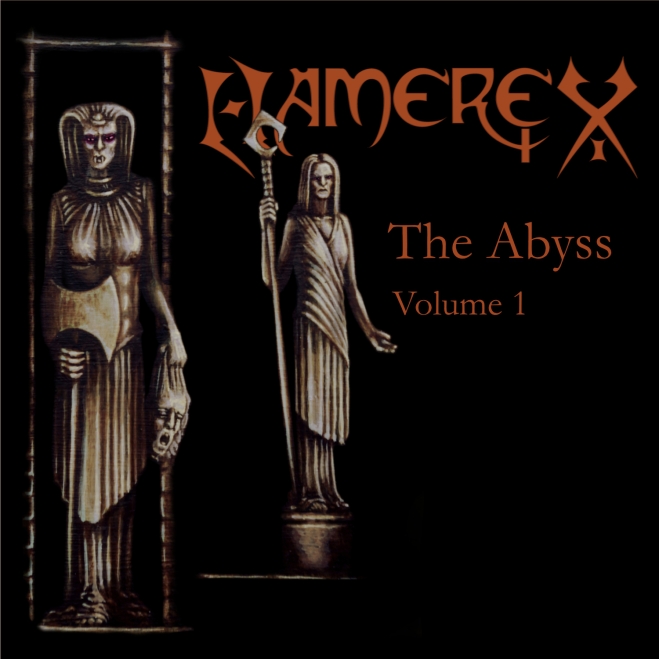 ‘The Abyss Vol 1’ is the first in a trilogy of EP’s set for release throughout 2018 on IX Music. It features 4 tracks; 2 new tracks ‘Broken’ and ‘Crucifixion’ and 2 re-recorded gems from previous EPs ‘IX’ and ‘Traitor’. The re-recorded ‘The Extremist’ retains the construction of the original, but dare I say it? It sounds so much meatier than the original. The production has greater depth, the delivery is faster and the mosh fest that ensues will no doubt be cataclysmic in a live setting! The initial growl from Hood is huge! The main vocals supplied by Blower are complemented by the harsh vocals of Hood throughout the track, the dual vocals work really well together. ‘Broken’, the first of the new tracks has a residing heavy bass, the vocals taking on a dissonant feel at first before sliding into more melodious tones, this change in vocal approach complements the instrumentation while the beat of the drum pummels away, driving the track along.

Armed with this heavier production the tracks are richer and contain more depth, the driving heavy basslines are muscular and robust throughout. This is more evident on the re-recorded ‘The Dark Tower’ which manages to retain the eerie, sinister feel through the distorted guitar solo intro as it did in the original, but it has been developed so that it packs one hell of a punch. The atmosphere surrounding the track feels sinister as the riffs from Andy and drums of Sharif build, the bassline thick and heavy as the intensity of the track and vocal delivery continues to escalate throughout.

Final track ‘Crucifixion’ is another new song with an edgy, stuttered intro that gives way to a full on assault, the barrage of drums from Sharif and bass from Marc when combined will leave your ears ringing. Marc Hood taking over on lead vocals for this track. His vocals are strong and intense offering a change in tone from Blower, both vocals of which suit the band equally. The killer riffs are delivered at break neck speed.

Due to embark upon The Dark Tour 2018 which begins on June 16th at the Black Mass Bar and Club and Wakefield, I can only imagine how these new tracks will transpire in a live venue. Without a doubt you’ll wake up with a tad bit of whiplash.

Don’t hold back, go catch these guys live. Any heavy metal / thrash metal fan will love this new EP and if this is just the first of the trilogy then I’m wondering what magic Hamerex are going to serve up with their next release.